The Language of Giving 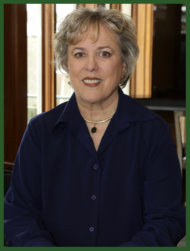 If you need a job done, full of complicated logistics, the need to tap into multiple resources, to organize a group of people with one mission, and provide unshakable leadership, who would you call? Who better than a former Colonel in the U.S. Army?

Everything Ann K. (Kris) Drach has done in her life gave her the skills and superpowers to reshape the Literacy Council of Southwestern Pennsylvania.

Drach says most people have a superpower: deep pockets, intelligence, passion, or force of will, and the point of having those powers is to help others.

After 28 years in the Army and more as a consultant, she retired to Greene County in 2011. But why here? Growing up as an Air Force brat she moved constantly; Drach never had a place she called “home.” She came to western Pennsylvania because several family members lived here, and unexpectedly felt at home for the first time in her life.

Drach had been an English as a Second Language (ELS) tutor, so she approached the Literacy Council, offering to tutor immigrants.

"I would give you a student if we had a program, but we don’t,” she was told. “Why don't you start one?" Her stomach tightened. She had been in charge her whole life and thought retirement would be relaxing. She agreed to try -- for one year.

Competence makes itself known. Drach started as a volunteer tutor, was named to the board, and within a few months, she was President, charged with leading the Literacy Council into the 21st century. At that point, the agency could only support six weeks of operations.

She spoke at churches, asked the Observer-Reporter to run articles, networked with teacher groups, posted flyers in libraries and restaurants, and sought partnerships with other nonprofits. 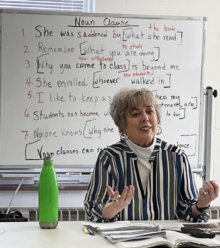 Kris Drach discusses noun clauses with her ESL class at the Literacy Council of Southwestern PA.

“Service is what makes me happy,” she admits. “I only feel right when I’m serving others.”

There are hundreds of immigrants in Washington County eager to speak English. She calls them “the invisible people.”

“I believe in the immigrant story. My family came from Scotland as indentured servants. That’s what makes America great and our foundation strong.”

Three factories in Charleroi that employ legal immigrants provide the bulk of their current 500 students: about 300 Chinese seeking asylum and 200 to 300 Haitians who are (mostly) doctors, lawyers, and teachers.

Drach calls them the hardest-working people in our country and champions their efforts to assimilate into our community.

She is also the Literacy Council’s largest individual donor. One of her superpowers is financial resources, much of which comes from her time as a defense consultant. “They didn’t call us ‘beltway bandits’ for nothing!” she admits.

Retired newspaper editor Park Burroughs, who is a volunteer tutor, says, “I don't think anyone can give more to a particular cause than Kris. As a leader she does not need to badger; it is her example that has inspired me and other tutors to do more.” 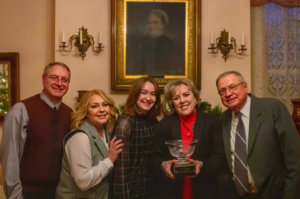 The WCCF is proud to award the Northrop Family Excellence Award in Community Philanthropy to Drach. She has demonstrated exceptional generosity, motivated others, and improved the quality of life in Washington County.

Her next mission? Acquiring a classroom in Charleroi.

“I feel very lucky for this opportunity,” she says, “It gives my life great purpose."