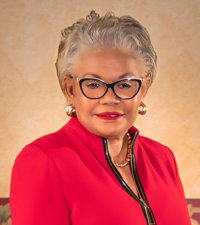 For Geraldine Jones, the secret of success was simple. Be true to yourself and you’ll get to the top.

She was born in Brownsville, the daughter of a steelworker and a teacher. They didn’t have a lot, but her parents managed to provide everything she needed. So how did she become the President of California University of Pennsylvania (now PennWest California)?

She did it by listening to her Dad.

Although he has since passed on, his influence steered her life. 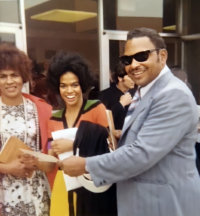 Geraldine, flanked by her parents, after graduating from California State College.

She did more than try. After graduating from California State College, she taught second grade until her alma mater approached her with a new position, working with disadvantaged students.

For the next 47 years, she was offered job after job, including department chair, associate dean, and provost/vice president.

“I’m still living by the lessons my Dad taught me: ‘Your word is important, and be true to who you are.’”

She did it by NOT listening to others.

“Other people try to define you. I stayed focused on the job, not on race or gender. Never let someone else define you – they’ll define your limitations.” Throughout her career, “I embraced who I am. No one can rob me of my joy.”

She did it by choosing the right spouse, Jeff Jones.

Even after 48 years, she lights up when she mentions him. He understood the pressures she was under and knew that the presidency wasn’t something she did alone; they did it together.

“He is smart, generous, kind, and made me a better person.” 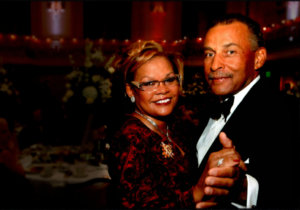 She did it through her attitude towards others.

“I live by treating individuals the way I want to be treated.” As a teenager, she was always in service, as a candy striper, Girl Scout, or babysitter. Even with those seemingly menial jobs, “Everything I do, I do seriously. I always gave my all.”

And she impressed her friends, like Washington Country Commissioner Larry Maggi who said, “I met Gerri Jones when we were both students at California State College. I got to know her well over the next 50 years. She has always been an energetic leader with a dedication to the university and the region. She is a visionary and a great community leader.”

The Washington Country Community Foundation honors Geraldine Jones as the 2022 recipient of Louis E. Waller Humanitarian Award, which recognizes a local individual devoted to the promotion of human welfare and the advancement of social reforms.

Her greatest job satisfaction? “As educators, we are in a position to touch the future. We say ‘Cal U Changes Lives,’ and it’s true! It gives you a good, warm feeling.”

She doesn’t dwell on being the first black woman in the top job. “I’ll know I was successful when I’m not the last woman nor the last black person to be president of Cal U.”

Her interaction with the community is simple.

“Much has been given, much is expected. I get great joy out of being part of something bigger than myself. I am truly honored and blessed.”