The Juliana J. Uram Fund was created by James Uram, Paul Uram, Thomas Uram, Matthew Uram, and Patrick Uram in 2001 as a gift to their mother.  In 2016, the name of the fund was revised to honor Andrew G. Uram as the 2016 Philanthropist of the Year. 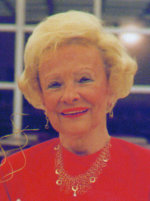 The daughter of Joseph and Julia Wojtyna Kondos, Juliana J. Uram was born on March 25, 1925 in Butler, Pennsylvania.

Compassionate and caring, Julie aspired to help others by becoming a nurse. She attended the Butler County Memorial Hospital School of Nursing and worked as a registered nurse and administrator at Butler Hospital before she and her husband, Andrew, relocated to New York City. The couple then moved to Washington County in 1947.

A passionate and tireless volunteer, Julie did so much more than share her time and talents with numerous local organizations — she blazed trails.

As fellow Founding WCCF Trustee Lou Waller once noted, “In the world of community activists, no one stands out greater than Julie Uram. Don’t let her size fool you; she is as big as they get in serving others.”

Julie was the first woman Campaign President for the United Way of Washington County, as well as the first woman to conduct four annual United Way Health‐O‐Ramas. A highly respected former leader of the Washington County Republican Party, Julie helped many public servants on both the state and local level and was sought out by high‐ranking GOP leaders at national conventions. As an active member of Immaculate Conception Church, she was the first woman to be President of the parish council and served on the church financial committee for many years.

One of her proudest achievements was the Anne Hanna Award for her efforts in founding and maintaining the Medallion Ball, a Thanksgiving tradition in Pittsburgh to benefit the Pittsburgh Guild for the Blind (now Pittsburgh Veteran Services). Julie was also the recipient of the Benjamin Rush Award from the Washington County Medical Society and the Roy Gillespie Award from the Washington Rotary Club. In 2007, the WCCF recognized her exemplary service to the community with the Woman of Philanthropy Award, an honor presented only once in the Community Foundation’s 16 years of operations.

“I don’t know of anyone who has given so much of her time, talent, and generosity for so many worthy causes including church, charitable, and civic organizations,” remarked former WCCF Chairman Frank Tracanna upon the presentation of the Foundation’s Woman of Philanthropy Award. “Julie was a pioneer in demonstrating the vital role women can play in our society." 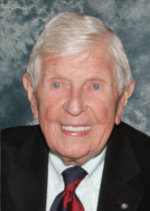 The Uram family name has been associated with charitable giving and service in Washington County for decades, and its patriarch, Andrew Uram, is no exception. Andrew served as the Assistant Vice President of the Trust Department and Banking Officer with Mellon Bank for 13 years before retiring in 1986. Prior to joining the bank, he spent 26 years with Metropolitan Life Insurance and was cited as a leader among the company’s 30,000 field representatives in the US and Canada at that time.

Active in various civic affairs, Andrew has served as Chairman of the 1964 and 1978 United Way campaigns and President in 1969, Chairman of the Catawba District of the Boy Scouts of America, President and Paul Harris Fellow of the Washington Rotary Club, and District Governor of Rotary District 7330. He has been a Director of the Alcohol & Drug Information Center, Multiple Sclerosis Society, as well as the Greater Washington Area Chamber of Commerce.

In addition to giving much of his time through service, Andrew and his late wife Julie came to be known as ardent financial supporters of many local charities including Immaculate Conception Church in Washington, the Diocese of Pittsburgh, and the Washington Hospital. They were also long-standing patrons of the Medallion Ball of St. Lucy’s Auxiliary of the Greater Pittsburgh Guild for the Blind, attending the event for 45 consecutive years. In 2012, Andrew made a significant contribution to St. John the Baptist Byzantine Catholic Church in Lyndora, PA to help host a centennial celebration and make repairs (Andrew’s father was a founding member of the church). Generous support has also been given to the Community Foundation through event sponsorships, WCCF Gives, the Family of Founders, and various funds.

In 1986 Andrew and Julie were recognized with the Washington Area Jaycees’ Distinguished Service Award. Andrew has been recognized with the Boy Scouts of America’s Silver Beaver Award, the highest honor a local council can bestow to an adult volunteer. Additionally, the Rotary Club of Washington recognized him in 2008 by renaming its International Service Award in his honor for serving as the leading force behind the club’s first major international service project (to ship books to Ghana through the Brother’s Brother Foundation). The Andrew G. Uram International Service Award recognizes a local individual who has provided humanitarian relief abroad or worked to promote world understanding and peace.