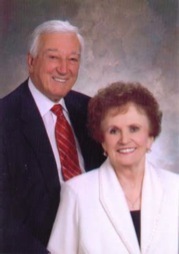 The Bassi Family Fund was created in conjunction with Lillian and Melvin Bassi being chosen by the WCCF as the 2005 Philanthropists of the Year. Grants are recommended by the Bassi family.

Committed to creating a better quality of life in the community, Lillian and Melvin often supported diverse charitable causes including higher education, wellness, care for the under‐privileged, and spiritual fulfillment.

Lillian Majoros Bassi has dedicated her life to education. A graduate of Bentleyville High School and California University of Pennsylvania, Lillian began her teaching career in the California School District in 1948. She retired to raise her family in 1954, but could not resist the call of the classroom. Teaching several more years in the Monongahela school system, she was the recipient of the Teacher of the Year Award prior to her permanent retirement in 1964.

Lillian’s involvement in education continued through California University ‐‐ its Core Values Award for integrity, civility, and responsibility was named in her honor. She is a Charter Member of the Foundation for California University and has been active in the Charleroi Athene Club and the Monongahela Womenʹs Club. She currently resides in Monongahela.

Melvin B. Bassi graduated from Charleroi High School, Washington & Jefferson College, and the University of Pittsburgh. A veteran of the U.S. Navy, he served in the Pacific Theatre during World War II. Melvin began his law career as a sole practitioner in Washington County and was a senior partner of Bassi, McCune & Vreeland. He served as President of the Board of Directors of Charleroi Federal Savings Bank from 1963 to 2000, where he was Chairman of the Board. Melvin also served on the Washington County Board of Commissioners from 1995 to 1996.

His honors include the Washington & Jefferson College Entrepreneur of the Year Award; Mon Valley YMCA Mind, Body, and Spirit Award; and the University of Pittsburghʹs Golden Panther Award. He was inducted into the Mon Valley Sports Hall of Fame in 1999 and into the Pennsylvania Association of Community Bankers Hall of Fame several years later.

Melvin was active with many professional groups including the Washington County Bar Association, serving as its President in 1974. He was also involved with numerous community organizations including the Rotary Club of Charleroi, Pittsburgh Athletic Association, the Mon Valley YMCA, and Washington & Jefferson College.