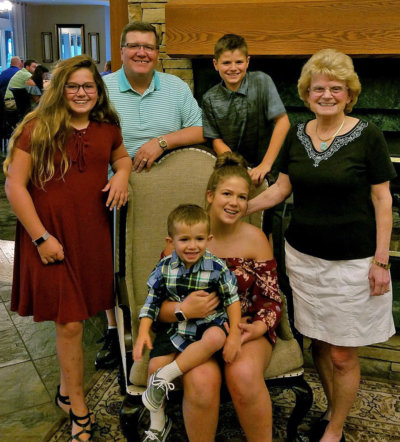 Marty and Judy Beichner with their grandchildren

The Beichner Family Fund was created in 2001 by Martin and Judy Beichner to support worthy non‐profit causes.

The Beichners were both born in Charleroi in 1948 and graduated from Mon Valley Catholic High School together.

Marty Beichner is a Vietnam veteran. After his high school graduation, he served as a Navy Corpsman and served with the Marines in Vietnam. When he returned, with the help of the GI Bill, Marty attended Duquesne University and graduated with a degree in English. Currently, Marty is the President and CEO of AccuTrex Products.

After graduating from high school, Judy Beichner attended Indiana University of Pennsylvania. She graduated with a degree in secondary mathematics education and went on to become a teacher. Judy taught for five years in Pittsburgh and then for eight years at the John F. Kennedy Catholic School in Washington. As a retired teacher, Judy now spends her free time enjoying the company of her grandchildren.

The Beichners moved to Washington in 1975. As active members in the Washington County community, they have made significant impacts with their service and charity. They are supporters of Washington City Mission, Citizens Library, Greater Washington County Food Bank, and the United Way. They also participate in the American Cancer Society’s Relay for Life in Chartiers Houston every year.

Marty and Judy are also active members at Immaculate Conception Church in Washington. They are supporters of the John F. Kennedy Catholic School, youth groups, and other programs that the church has established. Their grandchildren have also attended the school, making their love for it even stronger.

As a donor advised fund, the Beichner Family Fund gives Marty and Judy the opportunity to annually recommend the charitable cause to be supported. Typically, grants from this fund have benefited the Scholarship Fund at the John F. Kennedy Catholic School in Washington to provide tuition assistance for students at the school.