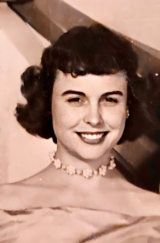 Betty Drach as a college freshman.

Born in 1930 and raised in Enid, Oklahoma, she was beautiful, ambitious, and brilliant. Like most young people of her era, Betty viewed the late 1940s as a time of tremendous opportunity and social change. Though it was still unusual for girls to pursue post-secondary education, her dream was to go to college, and she was pretty sure her straight-A grades would get her there.

After returning home from the war, Betty’s father took employment as a janitor. Her mom worked at Sears. They told Betty they would scrape together one year’s worth of tuition, but could not promise any more than that. Betty attended Oklahoma A&M, now Oklahoma State University. If her college date calendar was any indication, Betty led a very active, involved life on campus. In fact, she loved it. 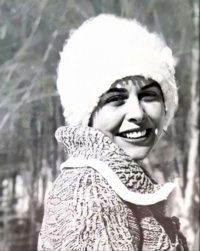 Unfortunately, at the end of her freshman year Betty’s parents told her they could not afford to send her back. Hoping her continued straight-As would land her a scholarship, she made application but was ultimately denied. Prevailing winds dictated that most opportunities be given to young men returning from the war. Young women were highly encouraged to go home and create the post-war families. It was a time that came to be known as the “Baby Boom.”

Five months after her freshman year, Betty met and married a USAF pilot. By the age of 24, she had three children under the age of five. Her life became consumed with raising her Boomers. A fourth child was born five years later, which sealed her fate for the foreseeable future.

Although Betty had lost her college dream, she was determined that all four of her children would not be denied their opportunity. In Betty’s household, the question was not if a child would go to college, but which college he or she would attend. But what made her commitment particularly unusual was that she had married a man who believed educating girls was a waste of money – an attitude that was not uncommon in the 1950s. 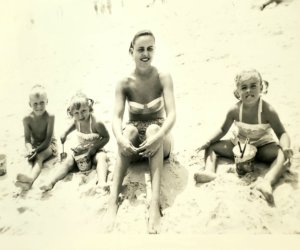 Betty and three of her children in 1956.

The fact that three of Betty’s children were girls created an extra challenge, but Betty was undaunted.

Thanks to Betty’s perseverance, all four of her children landed college degrees. At the age of 50, with her children successfully launched, Betty decided it was finally her turn. She went back to college and earned a nursing degree. As a newly minted registered nurse, Betty created a career as a social security disability analyst for the State of New York.

Long divorced and financially independent for the first time, Betty proved to be a sound money manager. Late in her life she decided that, upon her death, she wanted to start a scholarship fund for aspiring college students who struggled financially. Betty did not have a lot of money, but she had saved enough to make a difference for a few people. She passed in 2017 at the age of 87.

Before she died, Betty looked at her oldest daughter and said, “You know what I want done with any leftover funds from my estate.” “Yes,” her daughter said, “I know exactly what you want.”

The Betty Drach Internship Fund was created by Betty’s daughter Kris in 2022 to financially assist college students who are interning at a Washington County charity. Grants will be annually awarded to a charity to provide a monetary stipend to the qualifying student intern. Preference will be given to the Literacy Council of Southwestern Pennsylvania.