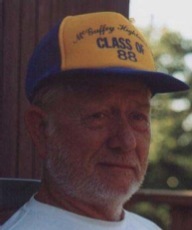 The Buckholt Science Scholarship Fund was created in 2000 by Paul Buckholt, a former Science teacher at McGuffey High School. The fund provides scholarships to McGuffey seniors pursing post secondary education in the field of science.

As a science teacher, Paul Buckholt was involved with McGuffey School District for more than 30 years. He has retired from his teaching position, but his involvement with McGuffey will continue into the future.

Buckholtʹs ties with McGuffey went beyond teaching chemistry and other science courses. He drove a school bus for the district, was a volunteer at the high school ballgames and volunteered to run the snack machine concession. Over the years, McGuffey students ate a lot of snacks, and Buckholt collected the coins from the machines. Sometimes he used the money to provide something a teacher needed, but which wasnʹt in the budget, or to help one of the student groups. But he set aside most of the money with the idea of using it in some way at some time to benefit the students.

That time came when he retired from teaching in 1999 and began thinking seriously of how to use the money. It was then that a suggestion from his friend, Dennis Dutton, turned him in the direction of the WCCF. The result was the Buckholt Science Scholarship Fund.

A modest man who keeps busy in his retirement, Buckholt is reluctant to discuss the gift he has made to McGuffey students. ʺThe Foundation will take good care of it,ʺ he says, ʺand if that makes other people think about doing something like that, well . . . thatʹs a good thing, too."