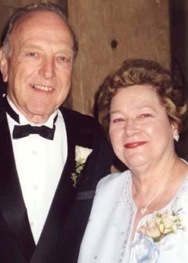 Jack spent his childhood playing baseball and football, fishing, and working in the PX, where he learned the basics of business and the importance of hard work and compassion for others. The sights, sounds, and smells of the old store remained vivid in his memory throughout his life. He shared these fond memories and childhood adventures often with his children and grandchildren.

Not only did Jack’s parents impart their strong work ethic to him, but he also learned the importance of honesty and courage from them. Jack’s parents were founding members and contributors to Our Lady of the Miraculous Medal Catholic Church in Meadowlands, where Jack received his First Holy Communion, the rites of Confirmation, and the sacrament of Marriage. Jack’s philosophy was that one grows stronger and more spiritually enlightened through community service and self-sacrifice. Throughout his life, he demonstrated his commitment and dedication not only to his family, but also to the church, local community, and his many friends.

Jack attended school in Meadowlands and graduated from Chartiers‐Houston High School in 1951. He was active in sports, primarily football, and remained an avid fan of the Pittsburgh Steelers. He often referred to his football heroes, Rocky Blier and Jack Lambert, as examples of men who worked hard to succeed.

Following his high school graduation, Jack enlisted in the United States Air Force and served in the Philippines. Jack had a deep sense of patriotism and honor, and through his words and actions, he inspired his family and close friends with the necessity of dignity, honesty, commitment, and humility.

After honorably completing his tour of duty in the military in 1957, Jack returned to Meadowlands and the family business, he and married Geraldine Lorraine Craig in 1958. Jack completed his education with an Associate’s degree in Computer Technology from Devrie Tech/Penn Tech in 1959, and the couple raised six children. Jack’s early career as a computer technician for RCA took the family to Camden, NJ, for four years, but they returned to Washington County to raise their children and later retire. Jack also worked for the Unisys Corporation of Pittsburgh and became a self‐taught financier and real estate investor. He taught basic financial concepts, such as not living above your means, spending less than you earn, and investing in your country.

Geraldine (Gerry) Lorraine Craig was born on October 16, 1934 in Washington County, the second child of Mira Bazzoli, also a naturalized Italian, and Franklin Craig, of British heritage. She spent her childhood in Washington, frequenting the PX where Jack, her future husband, often bagged and carried their groceries. Gerry also knew Jack as part of the church family at Our Lady of the Miraculous Medal Catholic Church in Meadowlands.

Like her future husband, Gerry attended school in Meadowlands, and graduated with honors from Trinity Senior High School, a rival school to Chartiers‐Houston, in 1953. In 1956, she graduated from The Washington Hospital School of Nursing, became a registered nurse, and worked as an obstetrical nurse at The Washington Hospital. Gerry and Jack were married in September 1958. She put her nursing career aside for the next 28 years to raise six children. In 1987, she returned to nursing at Kade Nursing Home until her retirement in 1997.

Like her husband, Gerry received her First Holy Communion at Our Lady of the Miraculous Medal Catholic Church in Meadowlands. She too was committed to her Christian beliefs and service through the church not only as their organist, but also in community outreach efforts. In the mid‐1980s, she joined the Park Avenue Baptist Church in Washington, PA, and continued serving the Lord, sharing her musical talent and gift of hospitality, as well as ministering to those in need.

Gerry enjoyed many interests and hobbies including antique and glass collecting, gardening, and travel, and she never shied away from adventure. When her son and daughter served as Peace Corps volunteers in Kenya and Nepal, Gerry quickly organized visits to share their experiences. But above all this, Gerry valued family. The Gaido household frequently hosted family and friends who dropped in to visit, and not a single Gaido birthday went without a homemade and lovingly‐decorated birthday cake. Gerry always made time for others and, in her later years, she traveled almost constantly frequently between five states, from South Carolina to Oregon, to visit her six children and nine grandchildren. She maintained close and loving relationships with a large extended family and many friends, and her patience, generosity, and unbounded love will always be remembered.