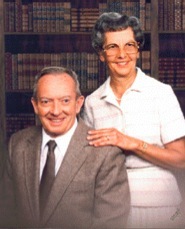 The David O. & Sara F. Johnson Family Education Fund was established in 2004 as a tribute to two loving, caring people who were wonderful parents and grandparents, hardworking and upstanding citizens, and constant contributors to the betterment of their community. The fund provides educational scholarships to deserving graduates of McGuffey High School.

David O. Johnson was born on March 25, 1923 in Bristoria, Pennsylvania and graduated from Richhill High School in 1941. He enlisted in the U.S. Army during World War II and served 27 months in the European Theatre of Operations with the 479th Ordnance Evacuation Company, achieving a rank of Technician, Fifth Grade.

Sara “Lee” Fordyce was born on September 4, 1924 in Claysville, Pennsylvania and was also a graduate of Richhill High School in the Class of 1942 and of Waynesburg College in 1944.

Soon after their marriage in 1946, David and Lee moved to Buffalo Township, where they lived for the remainder of their lives and developed many strong ties to the McGuffey community. Over the years they also made many lasting friendships which they treasured.

Dave worked as a special representative for Coen Oil Company for 29 years. He served on the McGuffey School Board for 17 years and also served a term as President of the Western Area Vo‐Tech School Board. He was an ardent supporter of quality education and athletic achievement.

Lee worked as a secretary to elementary principals, Robert Haberlen and John McCullough, over a period of 25 years, retiring in 1985. She was the much‐loved “Mrs. Johnson” to scores of children who passed through Claysville and Joe Walker Elementary Schools. Her other interests included being a member and officer in both the Na‐ tional Pike Chapter of the Daughters of the American Revolution, and the Three Rivers Chapter of the Colonial Dames of the Seventeenth Century, and being a member of Martha V. Paul Chapter of the Order of the Eastern Star, and of the Pennsylvania School Employees Retirement System.

Both Dave and Lee were active members of the Claysville United Presbyterian Church. Dave also served on the Buffalo Township Zoning Hearing Board. In addition, the Johnsons volunteered for many school‐related functions from PTA to athletic boosters and loyally attended their children’s activities.

Acquiring an education was an important goal to Dave and Lee since their own education plans had been altered by the circumstances of the World War. For this reason they did all they could so their children and grandchildren could obtain the best possible education. It seems fitting that their names would live on through the annual presentation of a scholarship to a McGuffey student, thereby continuing their encour‐ agement and support of the value of education.