The DiSalle Music Fund was created by Richard and Joan DiSalle to celebrate their love of music and support its growth and appreciation throughout Washington County. 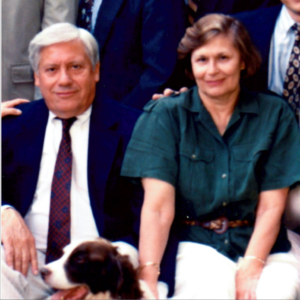 During her time at Duquesne University, while visiting her sister Eleanor who was then a nurse at Canonsburg Hospital, Joan met her future husband, Richard DiSalle. The couple were married on January 7, 1956, were married for over 64 years until Richard’s passing, and raised six children together.

The Honorable Judge Richard DiSalle was born to the late Pasquale and Assunta Mastrangioli DiSalle January 16, 1927, in Canonsburg. He graduated from Chartiers High School in 1944, and went on to attend the University of Pittsburgh, where he obtained his bachelor of arts degree in 1948 and his juris doctor in 1951.

In 1969, he was elected judge of the Court of Common Pleas of Washington County, where he served until 1977, when he was appointed to the Commonwealth Court of Pennsylvania. After two years on the Commonwealth Court, he was appointed to the Superior Court of Pennsylvania. These two appointments, granted to him by two governors from two different political parties, testified to Judge DiSalle's impeccable reputation for fairness in jurisprudence.

In 1982, he retired from the bench and returned to private practice with the law firm of Rose, Schmidt, Hasley and DiSalle, where he ultimately became the chairman of the firm. He continued his legal career with the law firm of Thomas, Thomas and Hafer, LLP, until his retirement at the age of 87. During his career, he was known as an excellent litigator, specializing in complex litigation. He also earned an outstanding reputation as a mediator in various forums of alternative dispute resolution.

He served as solicitor of Washington County and as a Fellow of the Law Society of the University of Pittsburgh School of Law.

Judge DiSalle was a connoisseur of classical music and opera. For decades, he faithfully attended performances of the Pittsburgh Symphony and the Pittsburgh Opera. His love for music inspired his children and led him to take up the piano after retiring from the practice of law.

Similarly, Joan instilled her passion for the Arts in her children, and encouraged all six of her children to study music. Two of her children graduated from Duquesne University School of Music, and four of her children are actively performing to this day, including her beloved son Joseph, who is a professional opera singer, musician and actor based in New York City and performing in venues all over the world.

In 2010, Joan and Richard established the DiSalle Music Fund with the Washington County Community Foundation, endowed to support music education and the Washington Symphony Orchestra.