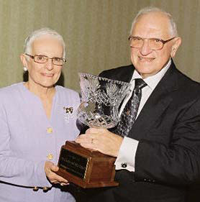 The Dr. Charles & Rita Tripoli Fund was created in conjunction with the Tripolis being named the 2011 Philanthropists of the Year. The fund supports the Catholic Charities Free Health Care Center.

Not many of us can count the people we’ve helped in the tens of thousands. Not many of us can count our children by the dozen. That’s what makes Dr. Charles Tripoli and his wife, Rita, so special. After 55 years of marriage, what they’ve had in common is taking care of people, whether those people live under their roof or on the other side of the globe.

During 46 years of family practice in Washington, Dr. Tripoli spent all day, every day caring for his patients, who, over four decades, numbered in the tens of thousands. He took care of families, delivered babies and cared for senior citizens.

“I loved them all, the whole spectrum,’’ he revealed. His caring hands reached far, far beyond the borders of Washington County. He made 13 mission trips to Central America and Haiti, serving the medical needs of some of the poorest people on the globe. No one wakes up one morning and says, “Hey! I think I go to Guatemala and help people today!” He became aware of the need through membership in the Catholic Physicians Guild.

While Dr. Tripoli influenced dozens of lives per day, Rita Tripoli stayed closer to home, influencing another dozen lives seven days a week, 24 hours a day. Early in their marriage they were anxious to start a family, and Rita gave birth to a baby boy. Their
first son, James, was born in 1957, followed by Louis, Peter, Paul, John, Philip and Anthony. While the Doctor was busy practicing medicine, which included evening hours four days a week, Rita was doing the myriad of jobs that are encompassed by the job title “Mother.” When it comes to taking care of people, she ranks right up there with her husband.

When they became aware of the needs of orphans in other countries, their unwavering faith and the hand of the Holy Spirit guided them to change the fate of some innocent lives. In August of 1974, their first daughter Mary, then 14 months old, arrived
from Vietnam. She was quickly followed by twins Ada and Angie, four months old, from Korea.

As a skilled nurse and doctor team, Rita and Charles knew how to provide care to those very sick children. As parents possessing great compassion, they are gifted in their ability to love and nurture these once‐forgotten children.

The following year Hang, at age 15, became a temporary family member. Through Rita’s example, Hang became a very productive citizen, wife and mother. With her faith in God and some hard work, she was reunited with her parents, who were able to immigrate to the U.S. after an 11‐year separation.

God had another gift for Rita; she was pregnant and a daughter Jennie was born. After Jennie came another gift from God: Sara, a ten‐year‐old from Korea. “Challenge? It was a challenge all right,” she said.

Now, their children are grown and he is retired. So did life slow down? Hardly! Dr. Tripoli volunteers twice a week at a free clinic in Pittsburgh, serving children and adult patients with no insurance. Rita helps take care of her 17 grandchildren and one great‐grand child. As a volunteer Eucharistic minister, she takes communion to patients in nursing homes. Will she rest? Not any time soon.

“I’ve always aspired to do more,” Rita commented. “I feel good, love doing it.” Dr. Tripoli thinks anyone can reach out to people in need. “We were created by God and put on earth to help one another. It’s all about your philosophy of life, setting priorities. There’s so much out there, just look. Find someone to help.”