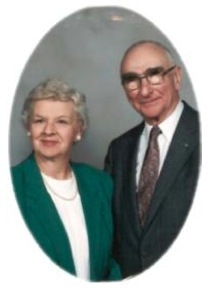 The Dr. Howard & Mary Eleanor Jack Fund was created by John A. and Barbara L. Campbell as a gift to Dr. & Mrs. Jack in recognition of their exemplary service.

Howard Jack received his Bachelorʹs Degree in Education from Washington & Jefferson College. His education was interrupted by WWII when he served in the Army Air Force. He received both his Masters and Doctoral degrees from the University of Pittsburgh. In 1947, Howard began his teaching career at East Washington High School. Over the years he served as principal at both Hampton High School and Thomas Jefferson High School. In 1965 he became the superintendent at Peters Township High School, a position he held until his retirement in 1983.

Just a few of the organizations in which Howard has been actively involved include the United Way of Washington County, McMurray Rotary Club, Peters Township Chamber of Commerce, Peters Township Library, Washington City Mission, the Boy Scouts, and the VITAprogram. A founding trustee of the Washington County Community Foundation, he is the immediate past chairman of the board. He is also a member of the Chartiers Masonic Lodge and the Sons of the American Revolution. Howard has been honored as the Clyde J. Tracanna Volunteer of the Year, a Rotary Paul Harris Fellow, the Chamber of Commerce Citizen of the Year, and Community Action Southwest’s Humanitarian of the Year.

Mary Eleanor Cooper Jack earned her Bachelors in Education from Grove City College, and her Masters from the University of Pittsburgh. She is a former business education teacher – first at Ellsworth High School (now Bentworth), then at Bethel Park High School. In addition to her teaching career, she was an executive secretary at Buhl Planetarium. She returned to teaching after raising their daughters, Kathleen, Marianne and Carol (all three of whom have become teachers).

Through the years, Mary Eleanor assisted Howard in many of his volunteer activities, especially the United Way Caring Tree project. She also was active as a Girl Scout Leader for many years.