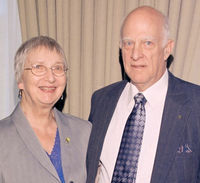 The Hart History Fund, a field of interest fund, was created by Tom and Myrna Hart in 2008 to provide support for historic education and preservation projects in Washington County.

Dr. Hart earned his master’s degree and doctorate in botany from Miami University in Oxford, Ohio, and taught for 28 years at Washington & Jefferson College.  He retired in 2000 as a professor of W&J’s biology department and holds an honorary doctorate emeritus from W&J.

In addition to serving as a member of the Community Foundation’s Board of Trustees, Dr. Hart was an elder at First Presbyterian Church of Washington, board member of Chartiers Creek Watershed Association, past supervisor of South Franklin Township, and historian and lecturer of the Bradford House Historical Association. He was also a recognized researcher and lecturer on the Whiskey Rebellion.

Later in life, the Harts pursued an interest in daylilies and hybridized several original kinds.

Dr. Hart passed on August 2, 2015 after a courageous battle with cancer.

Interested 501(c)(3) agencies may apply for grants from the Hart History Fund during the annual Designated Field of Interest grant cycle.