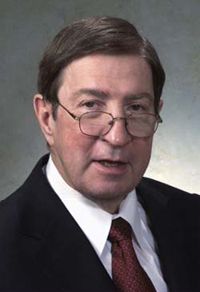 The J. Barry Stout Charitable Fund was created by the WCCF Board of Trustees to honor state Senator J. Barry Stout as the 2010 Philanthropist of the Year.

Sen. Stout’s career in the state Senate did not begin until his victory in a May 17, 1977 special election. Sen. Stout then went on serve the people of the 46th Senatorial District, which encompasses Washington, Greene, Beaver, Westmoreland, and Allegheny Counties, for the following 33 years.

As Democratic chairman of the Transportation Committee, Sen. Stout worked tirelessly to improve transportation infrastructure throughout Pennsylvania. One of the Senator’s major legislative achievements was generating initial financing of $1.65 billion for the second largest highway project in the nation – the Mon‐Fayette Expressway and Southern Beltway.

Additionally, he has secured billions for state road and bridge funding and worked on building the Uniontown to Brownsville Phase and the connection of Route 43 at Cheat Lake to I‐68.

Other than an impressive resume of transportation projects, Sen. Stout was also a vocal member of the state Senate Appropriations, Environmental Resources and Energy, and Policy committees.

A lifelong resident of Washington County, Sen. Stout was born November 7, 1936 in Fargo, Pennsylvania. The son of William B. and Mary Watkins Stout, Sen. Stout wed Lenore Ann Thompson on July 18, 1956. He is a 1964 graduate of Washington & Jefferson College. Sen. Stout was originally elected to the state House of Representatives in 1970 and won re‐election in 1972 and 1974.

When not in Harrisburg, Sen. Stout very active in the communities of the 46th District. He has participated in the Bentleyville Boosters Club, the Bentleyville Public Library, the Bentleyville Planning Commission, Lodge 237, Mon Valley Tri‐State Network, and the Charleroi Anniversary Celebration. Over the past 33 years, Sen. Stout has formed an indestructible bond with the residents of his Senate District. While his services in Harrisburg may have ended, Stout promises to continue to be a voice and leader in the community.

Sen. Stout is also very proud of the numerous awards and accolades he has received over the years which include the Washington County Library Award; Constructors Association of Western PA Man of the Year Award (1992); Transportation Advocate of the Year (1998); Through hard‐work and dedication a portion of the Mon‐Fayette Expressway was named the J. BARRY STOUT EXPRESSWAY (2002); the MIDA annual Chuck Chattaway Award (2002); Keystone Railroad Association Legislator of the Year (2003); the American Society of Highway Engineers (ASHE) 2005 Robert E. Pearson Person of the Year Award (National); United Labor Committee of Washington County Man of the Year (2004).

Grants from the fund are recommended by J. Barry Stout.