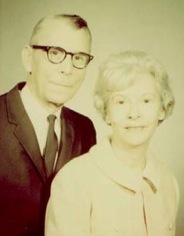 J. Edgar Williams was born on August 18, 1907 in Monongahela, PA and was raised on his fatherʹs farm. As a child he attended a one room school house, Dickeyʹs School, and later attended Lincoln Elementary then graduated from Monongahela High School. After graduating from Duffʹs Business Institute in 1929, he accepted a position with Kay, Richards & Co., becoming a partner in the firm in 1954. He was named executive vice president in 1969 when the firm merged to become Parker Hunter Incorporated. After 72 years as a stock broker, he retired at the age of 93 in 2000.

As a very active member of the community, J. Edgar served on various boards and committees, including the United Methodist Church of Monongahela, the Monongahela Valley Hospital Board of Trustees, the Mon Valley Health Resources Board of Directors, the Monongahela Cemetery Board and the administrative board of the Norman C. Ray Trust. He died on June 6, 2007.