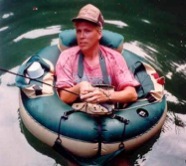 The James C. Miller Memorial Fund was created by family and friends as a lasting tribute to the man’s life. The fund supports charitable projects that best exemplify Jamesʹs life and interests.

At the time of his tragic death, James was 49 years old. Formerly of Centerville, OH, he passed away on Tuesday, December 24, 2002. Jim was a past member of Southbrook Christian Church. He was a 1973 graduate of Centerville High School and attended Wright State University. Jim was a Vice‐President and Co‐owner of Kadon Corp., and was a sales supervisor at Best Buy in Bethel Park, PA.

But it was his love of performing magic for which he will be fondly remembered. James will be missed by his sons Jonathon and Matthew and daughter Jacqueline, along with many other family and friends. Jim gave the greatest gift of all on Christmas Day 2002 when his organs were donated, giving four families the gift of life.