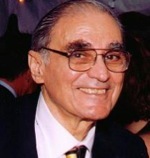 Judge Rodgers, of McMurray, was born November 20, 1920, in Houston; a son of Frank and Mary Cortese Rodgers. He graduated from Canonsburg High School as valedictorian when he was 15. Judge Rodgers graduated from the University of Pittsburgh in 1941, then attended Harvard Law School.

His studies were interrupted during World War II, when he served in the United States Navy in the Pacific Theater from 1942 to 1946. Judge Rodgers achieved the rank of Lieutenant before being released from active duty. He then attended University of Pittsburgh Law School, graduating in 1948.

Judge Rodgers was a former elder and deacon of Church of the Covenant in Washington and was former head of the church trustees.

The Judge Samuel L. Rodgers Fund was created by his daughter, Marta Rodgers Merchant, and friends in honor of Judge Rodgersʹs 80th birthday. The purposed of the fund is to support literacy projects in Washington County.