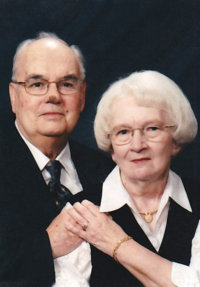 The Loughman Scholarship Fund was created in 2020 in honor of Ralph E. and Helen G. Loughman by their children and grandchildren.

Ralph and Helen were prominent members of the Fort Cherry community for more than 65 years. Both were born and raised in Greene County, then after they were married in 1954, they moved to Midway, PA. In 1960, they made their permanent home in McDonald, PA. There they raised their three children, all of whom graduated from Fort Cherry High School and went on to further their education.

Ralph and Helen went to one-room country schools through the eighth grade. They both graduated from Waynesburg High School. Ralph attended Waynesburg College, where he earned a Bachelor of Science degree. He later completed a master’s degree in education at the University of Pittsburgh. Ralph proudly served his country in the Army Chemical Corps during the Korean Conflict. He was chosen for that position because of his farming background and his math and science education. He started teaching at Midway High School, which later became part of the Fort Cherry School District. Ralph’s entire professional career in education was at Fort Cherry, where he not only taught, but also worked as a guidance counselor, Director of Pupil Personnel Services, Athletic Director, baseball coach, and bus driver. After retiring from Fort Cherry, he had a second career with H&R Block Tax Services in McDonald. He finally retired at the age of 86!

Helen completed nurses’ training at West Penn Hospital School of Nursing in Pittsburgh, PA. She worked as a Registered Nurse for many years in several different fields of nursing. She particularly enjoyed working with those with physical and mental disabilities, especially children. After retiring from nursing, she spent much of her time babysitting her four grandchildren.

Ralph and Helen were involved in their church and community. They were both long-time members of the Midway United Methodist Church. Ralph served as treasurer, lay leader, trustee, and Sunday school teacher. Helen sat on several committees and was active in the Women’s Guild in her younger days. Ralph was a member of the American Legion in McDonald and was their treasurer for many years. He coached local youth in baseball from Little League through American Legion League.

Ralph was wise, compassionate, willing to get involved, and always offered a helping hand. He was generous with his time and resources. Helen, with many characteristics attributed to nurses, was caring, nurturing, and empathetic. They loved their chosen careers in education and nursing.

Ralph and Helen Loughman were role models for all of us on how to live our lives to the fullest. They treated everyone with respect and courtesy, and served as mentors to many. They both had a strong sense of responsibility to their community. They loved their family, their church, and serving others.

Their family hopes that this scholarship will, in a small way, assist the recipients in pursuing their personal educational goals. Their family also asks that the recipients help them to carry on their parents' and grandparents' legacy of commitment to education, faith, family, community, and service to others.