Richard D. Constantine, Jr., born on August 4, 1956 in Greensburg, is the son of Annamarie and Richard Constantine, Sr. He graduated from Greensburg Central Catholic High School and from St. Vincent College. He received an MBA from California University of PA. Rick was the Chief Executive Officer at Monsour Medical Center in Jeanette, PA when he was diagnosed with a malignant brain tumor.

As his family prepared for the inevitable result of Richard’s malignant brain tumor, they considered each of these worthwhile organizations to receive the community’s expressions of sympathy and appreciation for Rick. Each organization was important to Rick and it seemed appropriate to continue his legacy. 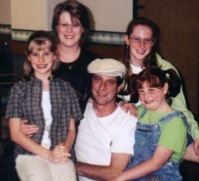 The family ultimately chose to direct the memorial contributions received after Rick’s death on February 3, 2002, to create the Richard D. Constantine Jr. Memorial Fund at the WCCF. This permits his wife, Beverly, and daughters, to annually consider the charitable cause to benefit from the fund, permitting all of Rick’s favorite causes to be supported over time. As each award is made, it will be an annual remembrance of Rick and his many contributions to his community.