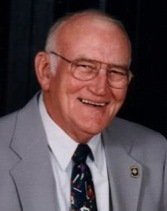 The Roy R. Gillespie Fund was initiated by the WCCF Board of Trustees in memory of fellow Trustee, Roy R. Gillespie. It provides support to charitable organizations within Washington County.

In addition to serving on the WCCF board, Roy was active in many community groups, including the Washington Rotary Club, Try‐Again Homes, Neighborhood Drug Awareness Council, Elks Lodge 776, Washington American Legion Post 945, and the Knights of Columbus.

Roy was born in Springfield, IL on June 26, 1928, the son of Palmer and Patricia Fenton Gillespie. He and his wife of 47 years, Rose, had eight children, four boys and four girls, including two sets of fraternal twins.

Roy was employed by PONY Baseball, serving as the President from 1980 to 1995. Even after retiring from PONY, he continued to volunteer there. He was inducted into the Bradley University Athletic Hall of Fame and the Washington Greene County Sports Hall of Fame.