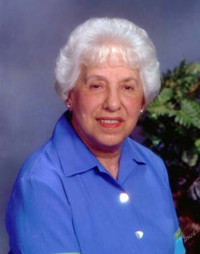 The Russell Family Fund was created to honor Genevieve Russell as the 2007 Philanthropist of the Year.

Described as an “Angel” by WCCF Trustee, Bill Campbell and his wife Carolyn, Genevieve Russell is known for her positive attitude and love of life as well as her active community involvement.

The daughter of Italian immigrants, Gen was born in Archibald, PA and graduated from Washington High School.

A very active member of our community, Gen has been involved with many organizations, particularly her church, the First Presbyterian Church of Washington where she is a Past Elder and Deacon. She has also taught Sunday school for years, sang in the choir, and was Chair of the Kitchen Committee. During Thanksgiving, she has worked in the Church’s “Feeding of the 500” project to provide a free turkey dinner to the area’s needy. And at Christmastime she volunteers for the “Candlelight Service.” Gen is also very involved in the WCCF’s Women of Philanthropy Committee which has worked this past year to raise money and awareness of the Foundation’s Mother’s Fund.

In addition to volunteering, Gen has also financially supported her church, American Cancer Society, American Heart Association, Presbyterian Senior Care, United Way of Washington County, and the Washington Hospital Foundation. Gen’s positive attitude has helped her cope with overwhelming tragedies in her lifetime. Her first husband, Richard Arent, was killed in a plane crash while serving in the United States Navy, two weeks before giving birth to their daughter Pamela. Gen returned to the workforce and obtained a position at PNC Bank where she met her second husband, W. Scott Russell. She and Mr. Russell, an Executive Vice President at PNC Bank, had three children, Scott, Ronald and Marianne. Tragically, Mr. Russell and their son Ron, were killed in a car accident while returning from a fishing trip in Buffalo, NY.

As a permanent memorial to her husband and son, Gen has created two separate funds at the WCCF, the W. Scott Russell Fund and the Russell Family Fund. The Russell Family Fund, created in conjunction with Gen being chosen as 2007 Philanthropist of the Year Award, will support the activities of the Mother’s Fund.