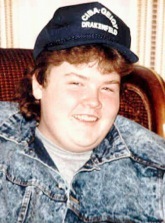 Scott A. Ashmore was born on June 1, 1971 in Washington, PA and graduated from Trinity High School in 1989. He had a passion for American muscle cars, enjoyed the out‐ doors and hunting, loved music and supported veteran’s issues.

“Scott was taken from us on January 4th, 1991 as a result of a tragic car accident,” writes his brother Todd Ashmore. “He was the center of a vast network of friends and family and we dedicate our efforts around this fund to keeping that network alive. It is our hope that this fund will assist charitable organizations in the Washington area that support causes similar to those in which Scott believed. He touched more people than we will ever know and it is our turn to give back.”

Todd and Suzanne Ashmore created the Scott Ashmore Legacy Fund in 2002 as a continuing memorial to the legacy that his brother Scott left behind. In the selection process, special emphasis will be given to charities that provide programming for children who have lost a sibling or otherwise support children’s issues.