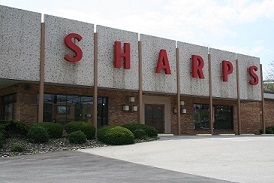 In 1917 Charles L. Sharp began Sharp’s Furniture Store in a small building at 110 West Chestnut Street, Washington, PA.  Three years later he purchased the property from Joseph M. Spriggs & Sons and in 1922 rebuilt the front section with new display windows.  Charles Sharp had gained his first experience in the furniture business working for nine years with the Powelson Company, which had been located on North Main Street.  Boyd S. Sharp joined his brother in the business in 1923, following his graduation from Washington and Jefferson College.  The local press recorded that “these young men are well and favorably known in Washington having lived all their lives here.”  Their father, L.B. Sharp, had conducted a grocery business on South Main Street, Washington, for nearly 40 years prior to his retirement in 1920.

Early in 1925 the old building housing Sharp’s was raised and a new structure erected.  The new building on West Chestnut Street had a frontage of 26 feet and a depth of 150 feet – reflecting 120 feet of addition to the relatively new display window section.  The new structure, three stories high, provided 11,700 square feet for the display of furniture, floor coverings and other household lines.  A section on the lower floor was equipped as a modern repair, shipping and work room.  At the rear of the main building was a large loading yard roofed over so that trucks could be loaded without exposure to the weather.  In the extreme rear of this building contained the boiler and coals bins for the new heating plant.  Part of this building was used as a garage for delivery trucks and the upper floors were for excess furniture stock.  The new facility, done by local firms, was reported to be “exceptionally and artistically lighted, with the newest fixtures.”  Among these fixtures was a rug rack for the display of 160 room size rugs.  With the new building, the arrangement of floors and the convenience afforded to customers, Sharp’s Furniture was recognized as “one of the best to be found anywhere.”

The new store at 110 West Chestnut Street held a formal opening on December 14 and 15, 1925.  The general public was invited to visit and inspect this modern facility.  The key statements from that 1925 invitation were – “we are well prepared to care for your needs in our various lines” - -  and “our invitation to you is not to urge you to buy, but to inspect and visit . . .”

Sharp’s Furniture served Southwestern Pennsylvania and surrounding states from this location for the next four decades, becoming known as the “store of personal service.”  Following World War II, Charles’s sons Charles Jr. and William joined the business.  In 1965, the Greater Washington County Redevelopment Authority took the site and Sharp’s moved to 360 Washington Road (Route 19).  A new modern one level facility was designed by Dickson & Associates and completed in 1969.  The new building accommodated a modern showroom of over 27,000 square feet, repair shop, warehouse, loading docks and garage.  The old boiler room and coal bins of the former building were gone – but customers and staff were able to enjoy a modern air conditioned showroom.

Upon the death of Charles L. Sharp, Sr. in 1973, Sharp’s Furniture store continued to flourish under the guidance of Charles Jr. and William.  Quality furniture and personal service were still the primary focus of this family business.  Charles Jr. retired in 1982 and William Sharp took responsibility for the day to day management and operation of the store.  David B. Sharp, William’s son, was a buyer and decorator for the store in the 1980’s.  He passed away in 1993.  In 1986, David Patnesky, William’s son-in-law joined the store, serving as General Manager.  William’s daughter Sue Sharp Patnesky, assumed a buyer and merchandising role in 1995.  With the passing of William in 2002, Sue and her sister Sibyl Sharp Ream reorganized the store in January 2003 with exciting plans to continue the family business and reach out to the growing community as the “store of personal service.”  Sadly, Sue became ill and passed away in May 2003.  Sibyl took over as President of Sharp’s Furniture with a renewed passion to continue the business and serve the ever expanding tri-state community with quality furnishings.

Without a member of the fourth generation interested in continuing the furniture store, Sibyl and David Ream sold the property at 360 Washington Road and used part of the proceeds to create the Sharp’s Furniture Store Fund, which will support the community that supported the store for three generations.