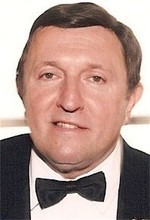 Thomas Philip Stout was born November 19, 1935 in Washington, PA.  The eldest of seven children born to the late William B. and Mary Watkins Stout, this hardworking and dedicated young man was a graduate of Claysville High School and attended San Bernardino Community College and California University of PA.

Philip began a very long and highly regarded career in the railroad construction industry when he joined Atlas Railroad Construction Co, his family’s construction business, in 1957.  He helped guide Atlas from meager beginnings to become one of the premier railroad contracting firms in the United States.

In 1984, with the help of his brother Barry and son Steven, Philip expanded the business by establishing Stout Group Ltd., with Atlas Services Corporation and Marta Track Constructors as subsidiaries.  He was also a founding partner of the real estate development group which created the Washington Square Complex in North Franklin Township, PA, home to Consol Energy Park, Washington & Jefferson College’s sports complex, Advanced Orthopedics Surgical Hospital, and Angelo’s Restaurant.

Philip was known for his hard work and dedication, and his entrepreneurial skills and business expertise allowed him to be a mentor and advisor to many.  His leadership was recognized when he received the Family Business of the Year Award from the University of Pittsburgh's Katz School of Business in 1998 and an honorary Doctorate of Humanities from Washington and Jefferson College in 2003.  He served as the national president of the National Railroad Construction and Maintenance Association in 1992, and he was honored with the association’s Lifetime Achievement Award in 2003, for his direct and positive impact in the railroad industry through his dedication, initiative and innovations.

Philip was a generous supporter of his community and served on many Boards including the Washington County United Way, the Council of Trustees at California University of PA, and the Liberty Mutual Insurance Advisory Board. He also found time to be a member of the Beallsville Lodge #237, F. & A.M. and associated Masonic organizations, the George Washington Chapter of the Sons of the American Revolution, and The Pennsylvania Society.

Due to his commitment and involvement in his local community, the T. Philip Stout Memorial Fund will provide support to local organizations and charities in Washington County. Grants from the fund are recommended by Steven and Lynne Stout.