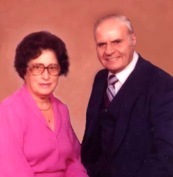 The Vitullo Family Fund was created by family and friends as a lasting tribute to Eutimio R. and Elizabeth G. Vitullo. The fund supports charitable projects in the Canonsburg community.

Upon the death of their mother, Elizabeth G. (Betty) Vitullo, on November 11, 2004, family members, Carmina Vitullo, Joseph and Kathleen Vitullo, Timothy and Nicole Vitullo, and grandchildren, chose to start the Vitullo Family Fund in memory of their parents and grandparents.

Their father, Eutimio R. (Timio) Vitullo, passed away on November 16, 1988. Timio immigrated to the United States from Italy in 1947 to attend the University of Pittsburgh. After graduating in 1951 he married Betty Gigliotti. Timio and Betty resided in Canonsburg, PA and owned Vitullo Travel Agency, Inc. which they founded in 1949.

Timio was active in the local community and volunteered with various community groups. He served on both the Canonsburg General Hospital Board of Directors and the Foundation Board. In 1981, he received the Citizen of the Year Award from the Central Chartiers Valley Chamber of Commerce.