If you talk with Cathie Laird about her parents, she laughingly will tell you that one of the best choices she made in her entire life was the two people she selected to be her mom and dad. In reality, she knows that she is not the one who made the choice, but her heart overflows with thanksgiving when she thinks of them and their goodness to her.

The two people of whom she speaks are Barbara M. and the late William L. Laird. Both graduated from Claysville High School. Barbara was Treasurer of the Class of 1949; Bill was a member of the Class of 1943. Barbara furthered her education at the Stenotype Institute of Pittsburgh, graduating in 1950. After Bill returned home from serving in the United States Army in World War II, he met Barbara on a blind date at the Claysville Fair and went on to marry her on September 5, 1953. They also parented two sons, William Jeffrey and Samuel M. Laird. 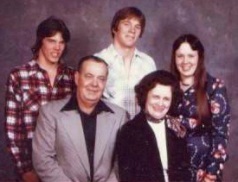 In addition to raising three children and running their farm, Barbara and Bill were involved in community affairs. Both were active in The Claysville United Presbyterian Church on Greene Street and Donegal Township politics. Barbara worked as the Donegal Township tax collector for twenty-six years; Bill served as a township supervisor for eighteen years and was instrumental in the formation of the Claysville-Donegal Joint Municipal Authority. Through the years, Barbara was also employed by Jessop Steel Company, Sears, Mellon Bank, and the McGuffey School District; Bill was a steelworker at Jessop Steel Company, retiring in 1990.

Barbara has lived in the Laird home on the family farm in Donegal Township for over sixty years.  She continues to enjoy her family, which has grown over the past years to include five grandsons, Jordan, Evan, Taylor, Brittan, and Brandon Laird.  Bill passed on suddenly on April 15, 1997.

When Cathie retired recently from McGuffey School District after having taught there for thirty-five years, one of her dreams was to honor her parents in some way for their role in making her successful career as an elementary teacher possible. Her hope is that through the William L. and Barbara M. Laird Fund, financial assistance will be provided to other graduates of McGuffey High School who aspire to become elementary teachers.

In the photos above: Cathie with her mother and father before the old Claysville High School, the building which later became the Claysville Elementary School in which she taught for 15 years, was demolished.