The Vision Fund was created in 2018 as part of the Foundation's Envision the Future campaign. The Fund provides grants to local charities in support of vision services in Washington County, with an emphasis on supporting visually-impaired youth from birth to age 18. 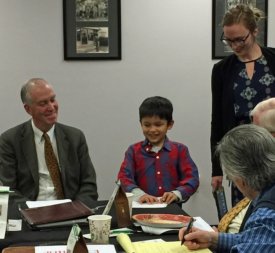 In 2017, the WCCF Board of Trustees visited the Washington-Greene County Blind Association (now Vision Services of Washington-Greene), the primary nonprofit provider of vision-related services in Washington County. Trustees and Staﬀ met seven year-old Alan Suyasa, who has been blind since birth. He attends South Central Elementary School in the Canon-McMillan School District and receives Braille instruction daily. Alan's activities include playing his piano, creating digital music on his iPad, swimming, and riding horses. He also plays on the Pittsburgh Penguins Blind Ice Hockey Team.

The WGCBA provided details regarding the services it currently provides as well as their future plans to train adults and children on the latest technology that is available for people who are blind or who have low vision.

"Sight is a precious commodity which is taken for granted by many people. For those suﬀering with vision impairment, the Washington-Greene County Blind Association provides a source for information, programs, direction and support. It was moving to learn about the WGCBA's dedication and commitment to our community." - Edward C. Morascyzk, WCCF Chairman of the Board during the Envision the Future campaign.

The 2016 Census Bureau Report reveals that there are an estimated 4,300 Washington County Residents who have a Vision Disability. Approximately 2,400 of those individuals are between birth and 34 years of age. An estimated 500 are between the ages of 35-64 and the remaining 1,400 are in the 65+ age bracket.