Eighty Four, PA – The Washington County Community Foundation (WCCF) recently awarded a $40,000 unrestricted grant to the Brownson House. The grant was awarded from the Harold and Enes Hockett Fund and the John and Thelma Curtis Fund.

“Enes Odisio Hockett and Thelma Odisio Curtis were two sisters from Avella who wanted to create a legacy that would help others,” said Betsie Trew, WCCF President & CEO. “At the time of creation, the combined value of the two funds was $1 million. Today, their value has increased to approximately $1.8 million, which has allowed for generous grant-making. Cumulatively, the funds have awarded over $300,000 in grants.”

Thelma spent her life in Washington County. Her husband John (also an Avella native) owned and ran a Ford dealership on Maiden Street in Washington. Meanwhile, for 35 years, Thelma worked for the Pennsylvania state unemployment office. The couple quietly engaged in many good works and giving opportunities during their lifetimes.

After graduation, Enes moved to Washington, D.C. to work at the Pentagon. There she met and married Harold Hockett, a Lieutenant Commander in the United States Navy. After they retired from service, the couple moved to Southpointe so that Enes and Thelma could spend more time together.

In the years that followed, Enes, Harold, Thelma, and John all passed.

Basketball is just one of many youth athletic programs at the Brownson House.

Dr. Andrew Lucas, advisor of these funds, shared a few remarks about why he recommended this generous support: “So many children have benefitted from programs at the Brownson House, including my own children. I coached Jon Celani when he was playing youth football at Trinity, and now I have the pleasure of watching him manage the Brownson House so that other local youngsters can participate in sports. Jon is the salt of the earth and the Brownson House couldn’t be in better hands.”

It's been nearly a century of fun and games for the Brownson House, a place where local children can learn the values of hard work, teamwork, and good sportsmanship. The Brownson House and its Vernon C. Neal Sportsplex are more than just places for recreational activities, they’re community spaces that have fostered a greater sense of involvement for children and adults alike.

“Talk to anyone 80 years or younger and they’ll have had some type of involvement with the Brownson House," remarked Brownson House Executive Director Jon Celani. 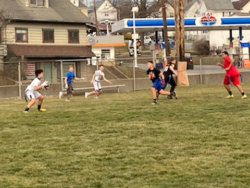 Youth programs at the Brownson House include both indoor and outdoor activities.

While dealing with the impact of COVID-19, the Brownson House lost significant revenue from cancelled events and activities, and at the same time, experienced an increase in costs through the implementation of the Commonwealth's required safety guidelines.

Celani stated, “We have social distancing, we require masks, we thoroughly clean after each game, and we suspend activities if there’s a positive COVID test for that team. But we want to give the kids a sense of normalcy, so they can still get out, still play, and be active even with everything else that’s going on.”

After all, at the end of the day, it is the kids who matter most. Celani went on to say, “I’m a firm believer that what can be taught in recreation can be carried over in all stages of life, especially adulthood, and make solid citizens. Teamwork, leadership, following directions – all of these aspects that we learn from our coaches are the same things that build us up as we grow and mature.”

“As such a valued part of the community, the Brownson House hopes that by continuing to offer quality programs and positioning itself for future growth, it will be sure to make it well beyond that 100-year milestone,” remarked Trew. “Helping the community was the primary objective of the Curtis and Hockett funds.”