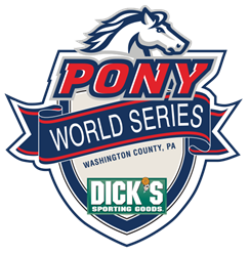 World Series Tournaments is the host organization for the DICK’S Sporting Goods PONY League World Series. This all-volunteer organization is responsible for the funding and staffing requirements of the event, along with all other related operational activities. It annually solicits funding from businesses and individuals to cover the expenses but were facing a financial shortfall this year because of the pandemic.

‘The COVID-19 pandemic forced the cancellation of the 2020 PONY World Series and has also impacted sponsorship and grant support for this year’s series,” said Nathan Voytek, President of World Series Tournaments. “We are very grateful to both the Washington County Community Foundation and Washington County Tourism Promotion Agency for their financial support to ensure that the series can be shared throughout the region through video and television broadcasts.”

Since the video and television components were added in 2015 the PONY World Series has realized a significant increase in both attendance and revenue generation.

“The 2019 Series drew players and fans from five countries, and it realized record attendance of over 24,000 throughout the tournament. The estimated economic impact of the PONY World Series in that year alone was over $4.0 million into our local economy,” said Jeff Kotula, President of the Washington County Chamber of Commerce & Tourism Promotion Agency. “This event is a significant tourism attraction in Washington County, and we are proud of its continued success in driving tourism growth and focus on our county.”

Many charities in Washington County were impacted negatively by the COVID-19 pandemic, so it was not a surprise to either the Foundation or the Tourism Agency to learn that World Series Tournaments also was facing a financial shortfall because of the virus. Over the years, the two funding organizations have commonly supported other community projects. However, this is the first time that the two funding organizations have actively co-funded a project.

“We are very pleased to partner with the Washington County Tourism Promotion Agency in support of this treasured community event,” remarked Betsie Trew, President & CEO, Washington County Community Foundation. “The financial support of many Foundation donors, as well as very positive investment returns over the past few years, have enabled us to increase our grants to the community. Knowing that the Tourism Agency was willing to increase its support of the Series to $35,000, made our decision to also support it at that same level much easier.”

The grant from the Community Foundation is being made from the Community CARE Fund, which has supported a wide variety of charitable activities since its creation in 2017. Tourism grants are made possible by the Washington County Hotel Tax.