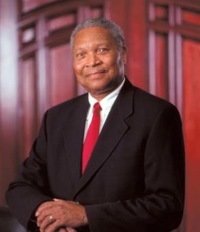 Eighty Four, PA – The Washington County Community Foundation (WCCF) is currently accepting nominations for its Louis E. Waller Humanitarian Award, which includes a $1,000 grant to the charity of the recipient’s choice.

The Award was created by the WCCF Board of Trustees to honor Waller for his lifetime of service to others and for his dedication to civil rights for all Americans. When presented with the inaugural award in 2008, Waller said, “I am deeply moved and humbled to have others recognize value in the activities that have been so important to me over the years. This award truly is the culminating honor of my lifetime.”

“Black History Month is a most fitting time to solicit nominations for this award, as Lou passionately but peacefully championed for equal rights for African Americans during the civil rights era and throughout his adult life,” said Betsie Trew, WCCF President & CEO. “Lou genuinely loved people and could always find the good in a person, even when others could not. The word ‘humanitarian’ is the perfect adjective to describe him.”

Waller served in various capacities in both the local and state chapters of the NAACP and authored the series “The American Negro” published in the Observer-Reporter. Among many other awards, he received Renaissance Publication’s Black Trailblazer Award and the Washington NAACP Human Rights Award. He was involved with numerous local charities, often serving in a leadership capacity, and was a Founding Trustee and past Chairman of the Board of the WCCF.

The Waller Award recognizes a local individual or organization who is devoted to the promotion of human welfare and the advancement of social reforms as evidenced by humanitarian deeds in the community, whether local, national or international.

A nomination form is available on www.wccf.net and nominations will be accepted until Sunday, February 28. Questions may be directed to the Foundation at 724-222-6330 or info@wccf.net.