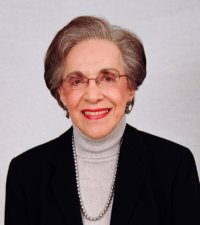 The Washington County Community Foundation (WCCF) is pleased to announce that Martha Y. Berman has been named the posthumous recipient of this year’s Richard L. White Excellence Award for Board Service. Created by the WCCF Board of Trustees in 2012, the award recognizes an individual who serves as an exemplary member of the Board, wholeheartedly sharing his or her time, talent, and treasures to support the Foundation and its mission. Both current and former Trustees are eligible to receive the award, which is named in honor of Founding Trustee and Past Chairman of the Board, Richard L. White. The inaugural award was presented to White in 2012.

Berman was born in Washington, PA, to the late Jessie and Maurice Yorkin in 1924. She graduated from Pennsylvania College for Women (now Chatham University) with a degree in economics and government and was then granted a fellowship at the National Institute of Public Affairs. Prior to her marriage to Dr. Bernard Berman, she worked as a labor mediator for the National Labor Relations Board. When her two daughters, Diane and Linda, entered their high school years, Berman earned a Master’s Degree in counseling. She worked as a full-time counselor at Peters Township High School until her retirement in 1986.

Berman was a member of the WCCF Board of Trustees from 2000 until 2009. Her affinity for supporting students in pursuit of higher education made her an apt choice for Chair of the Foundation’s Allocations & Programs Committee, which holds the responsibility of reviewing grant and scholarship applications. Those who knew her will attest that is was a role that she took very seriously. Additionally, Berman may be credited with helping the WCCF to build relationships with key members of the community who ultimately became some of its most faithful and generous donors.

In addition to sharing her time and talents with the WCCF, she created the perpetual Berman Family Fund in 2000 to support bereavement counseling at Hospice Care at the Washington Hospital, and she attained membership in two of the Foundation’s prestigious donor recognition groups: the Family of Founders and the Samuel T. Brownlee Society.

WCCF President & CEO Betsie Trew stated, “Our only regret is that we were not able to honor Martha with this award while she was still with us.” Berman’s daughter, Diane, will accept the Richard L. White Excellence Award for Board Service on her mother’s behalf at the WCCF’s annual Legacy Luncheon on Friday, May 17.

The WCCF promotes and facilitates local philanthropy and is the largest publicly supported grant-making foundation headquartered in Washington County. Cumulatively, grants of more than $14,000,000 have been awarded from the approximate 200 funds of the Foundation. The Foundation also maintains the historic Samuel T. Brownlee House in Eighty Four, PA, where it is headquartered, and annually conducts a day of giving which benefits more than 100 local charities.