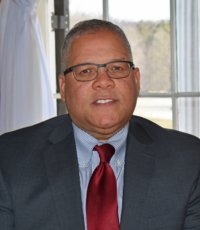 The Washington County Community Foundation (WCCF) is pleased to announce that it has selected Robert C. Griffin to receive its annual Louis E. Waller Humanitarian Award. The award recognizes a local individual or organization devoted to the promotion of human welfare or the advancement of social reform as evidenced by humanitarian deeds in the community, whether local, national, or international. The inaugural award was presented to Louis E. Waller in 2008.

Born at West Point, Griffin attended the St. Francis School in Newburgh, New York, before his family relocated to Washington County. He is a graduate of Washington High School and University of Pittsburgh, where he earned both a BA and MPA.

Since 2005, Griffin has served as the Economic Development Director of the Redevelopment Authority of the County of Washington. Formerly, he held the title of Vice President at Waller Corporation.

Griffin is the son of the late John C. and Joan Bruce Griffin, who were community leaders in their own right. Although his father died a young man, Bob has memories of him tutoring students in the family living room and helping to reopen the LeMoyne Center’s swimming pool. His mother Joan successfully finished raising five children by herself and still found time to tirelessly serve the community through boards and civic groups, including the Washington Hospital Board of Trustees and Washington School District School Board.

Griffin reflects, “I learned about service early in life from my parents, but I didn’t really fully understand what they were doing until I was older.” And almost instinctually, when there has been a need for him, he has been ready to answer the call.

Additionally, he has served as a Deacon at First Presbyterian Church 1793 and coached numerous sports teams.

“Finding ways, no matter how large or small, to help people – that is why we’re here. Mr. Waller was a man of deep faith and taught me that the best way to honor God is through servant leadership and helping others,” Griffin remarked. The Louis E. Waller Humanitarian Award will be presented to Griffin at the WCCF’s annual Legacy Luncheon on Friday, May 17. In his honor, the Foundation will award a $1,000 unrestricted grant to the Mel Blount Youth Home in support of its leadership initiative.

The WCCF promotes and facilitates local philanthropy and is the largest publicly supported grant-making foundation headquartered in Washington County. In addition to hosting WCCF Gives, an annual day of giving, the WCCF administers a broad grant-making program and provides educational seminars for local charities at no charge. To learn more about the Foundation’s activities, please visit www.wccf.net.