For the first time in its history, WCCF Gives, a community-wide day of giving held each September, resulted in grants of more than $1,000,000 to local charities! Grants of $1,058,581 were issued in October to 113 participating charities. The event has grown 150% since its inception in 2013, and cumulatively has raised more than $5.3 million in support of charitable activities in Washington County. This year a total of 2,800 donors made over 4,700 gifts, also setting records for the event.

Each year the WCCF has secured a $100,000 bonus pool to encourage giving. The bonus pool is distributed 50% by the number of donors and 50% by the dollars contributed. 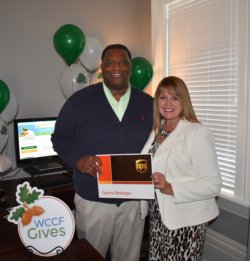 An additional benefit to local charities, is that the WCCF has never charged a fee to charities, as other community foundations have done. To help cover the cost to administer this event, the UPS Foundation issued a $10,000 grant to the WCCF.

Other organizations of note that increased both their donors and dollars over last year include the Chartiers-Houston Public Library, John K. Tener Library, Frank Sarris Library, Mariana Public Library, Domestic Violence Services of SWPA, Literacy Council of SWPA, and Meals on Wheels @ the Crossroads.

Grants to participating charities were distributed at five Gives Gatherings events, which were hosted at different charity locations throughout Washington County. This opportunity provided the additional benefit of enabling charity representatives to learn about the programs provided by other local charities. For more complete information about WCCF Gives, please visit www.wccfgives.org.

Top photo: WCCF Gives Sponsors, Charity Representatives, as well as WCCF Trustees and Staff gather at the Duncan & Miller Glass Museum in Washington to celebrate the success of WCCF Gives 2019.

The WCCF promotes and facilitates local philanthropy and is the largest publicly supported grant-making foundation headquartered in Washington County. In addition to hosting an annual day of giving, the WCCF administers a broad grant-making program and provides educational seminars at no charge for local charities. To learn more about the Foundation’s activities, please visit www.wccf.net.