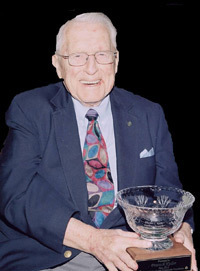 The Charles C. Keller Excellence Award for Corporate Philanthropy was created by the Board of Trustees of the Washington County Community Foundation in 2011 to recognize a local for-profit business for exemplary giving and community service. The award is named in honor of Founding Trustee and Past Chairman of the Board, Charles C. Keller.

Chuck was humbled by the award, saying

“That the Charles C. Keller Excellence Award for Corporate Philanthropy should bear my name is an honor I shall treasure. I have always felt committed to a spirit of giving, and I have been proud of the development of the WCCF as a vehicle to encourage and enable people to engage in philanthropy. That my law firm should be the first recipient of a corporate philanthropy award is a source of great satisfaction and pride. I know how extensive its community service has been through the years. My greater joy is in recognizing that a long parade of deserving businesses and professions will receive this honor and recognition in the years to come."

In WWII, Chuck served as a pilot in the United States Army Air Corps, and retired as a Lt. Colonel and Judge Advocate after 30 years in the United States Air Force. A Summa Cum Laude graduate of California State College (now California University of Pennsylvania) Chuck received that institution’s highest undergraduate honor, the Distinguished Service Award and was also honored by the University with a Doctorate of Humane Letters. He received his Juris Doctor from the University of Pittsburgh. A former member and President of the Washington County Bar Association, Chuck received its highest honor, the Distinguished Service Award. For 22 years he served as editor and publisher of the Washington County Reports and also served as a Trustee of the Washington County Bar Foundation. Chuck served as President of the Pennsylvania Bar Association, as a member of its Board of Governors, and was also a Fellow of the Pennsylvania Bar Foundation. He has served in the American Bar Association House of Delegates, was elected a Fellow of the American College of Trial Lawyers and of the American Bar Foundation.

Chuck has served as President of Rotary International, President of the Washington County Easter Seal Society, Allegheny Trails Council, Boy Scouts of America, Mon Valley United Way, Mon Valley Hospital, Mon Valley Health and Welfare Council, General Alumni Association of California University of PA, and the California Area Chamber of Commerce. He served as general counsel for California’s Student Association for 50 years and was a member of the Board of Directors of the PA State Chamber of Commerce.

Nominations for the annual Charles C. Keller Excellence Award for Corporate Philanthropy will be accepted until January 31 of each year. Criteria for the award are as follows: Demonstrate a company philosophy of community service, such as time-off or flexible scheduling for employees to perform community service; Encourage employee commitment at multiple levels of the company; Donate resources including financial, personnel, facility or product; Orchestrate a sustained effort to address a community need; Promote active community participation by others.

“The test of our worth is the service that we render.” – Theodore Roosevelt