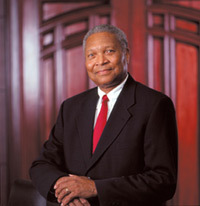 The Louis E. Waller Humanitarian Award was created by the Board of Trustees of the Washington County Community Foundation in 2008 to recognize a local individual or organization who is devoted to the promotion of human welfare and/or the advancement of social reforms as evidenced by humanitarian deeds in the community, whether local, national or international. The award is named in honor of Founding Trustee and Past Chairman of the Board, Louis E. Waller. The initial award was presented to Lou in 2008. He passed in 2009.

“I am deeply moved and humbled to have others recognize value in the activities that have been so important to me over the years. This award truly is the culminating honor of my lifetime.” ‐ Louis E. Waller, Sr.

Lou championed for equal rights for African Americans during the civil rights era and has served in various capacities at the NAACP both at the local and state levels. In 1965 he was honored by the Washington NAACP with its Human Rights Award. He authored the series “The American Negro” published in the Observer-Reporter and also received the Renaissance Publications 1993 Black Trailblazer Award.

A strong advocate for education, Lou served on the Board of Trustees of Waynesburg College, receiving an Honorary Doctorate of Humane Letters in 1983. He also served for many years as the chairman of the ABCDE Fund that awards scholarships to African American students pursuing higher education.

“Be ashamed to die until you have won some victory for humanity.” - Horace Mann