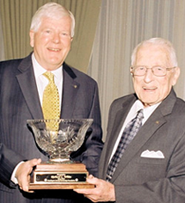 The Richard L. White Excellence Award for Board Service was created by the Board of Trustees of the Washington County Community Foundation in 2012 to recognize an individual who serves as an exemplary member of the Board, wholeheartedly sharing his or her time, talent, and treasures to support the Foundation and its mission. The award is named in honor of Founding Trustee and Past Chairman of the Board, Richard L. White. The initial award was presented to Richard in 2012.

The history of the Washington County Community Foundation cannot be told without highlighting the significant contributions of time, talent, and treasures of Richard L. White.

Friends of the Foundation certainly are aware of his service as an exemplary Chairman (2010-2011). But, his devotion to our organization can be traced back to our origins. In fact, long before the Foundation was formed, Richard was already one of our greatest advocates.

During the six years that it took the WCCF to secure our first million in charitable assets, Richard served as Board Treasurer. His capable leadership helped the Foundation to navigate through the challenges posed by an uncertain future.

Almost a decade later, Richard was at the helm as the Foundation experienced two incredible years: an unprecedented $3.4 million in donor contributions in 2010 followed by a record-breaking $481,000 in grants awarded in 2011.

After his Chairmanship ended, Richard continued to serve the Foundation by leading the effort to raise $250,000 for the Arts Fund.

During a surprise presentation at the 2012 Legacy Celebration, fellow Trustee Charles C. Keller announced the creation of this perpetual award in Richard’s name.

In his presentation Chuck said,

“Richard, you know what is takes to be an effective member of a charitable board; and your service to the Community Foundation has set the standard for other Trustees to emulate. In the future, this award will recognize Trustees who have demonstrated a commitment to the Foundation beyond the ordinary. Tonight, on behalf of the Community Foundation Board of Trustees and Staff, I present the inaugural Richard L. White Excellence Award for Board Service to you.”

Criteria for the award are as follows: Invests a significant amount of time in the Foundation – a commitment that extends far beyond the normal responsibilities of the Board; Dedicates his or her unique talents to addressing specific needs within the Foundation; Supports the Foundation and its activities through the donation of personal resources; Embodies the spirit of service.

Any individual who has served as a Trustee of the Community Foundation, including both current and former Trustees, is eligible for this honor.